The Dream Chaser is being prepared to deliver cargo to the International Space Station under NASA’s Commercial Resupply Services 2 (CRS2) contract as early as 2020. Before SNC can begin to manufacture the final design of the vehicle, a series of ground tests must be done with a test article to validate aerodynamics, flight software and control systems.

Here is a brief overview of several tests that have been completed to date on the Dream Chaser at NASA’s AFRC:

The Dream Chaser must undergo several tow tests to validate the performance of the spacecraft’s nose skid, brakes, tires and critical elements of the Guidance, Navigation and Control system of the Dream Chaser. During these tow tests, the vehicle is towed by a pickup truck to various speeds. Once the top speed is reached, Dream Chaser is then released from the tow hitch and the vehicle’s braking system is then used to bring it to a complete stop. View a video of the tow test. 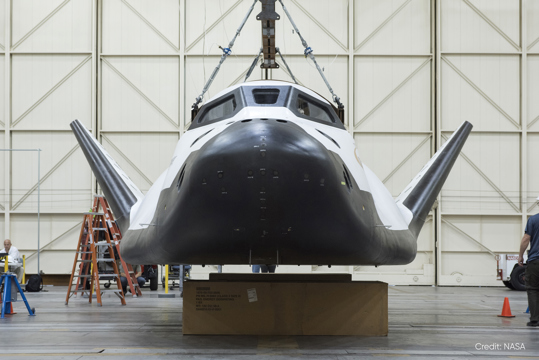 SNC, again partnering with the AFRC Flight Loads Lab, measured the structural response of the Dream Chaser spacecraft to programmed flight control system sweeps at various frequencies. This test was performed with the Dream Chaser in an airborne configuration (landing gear retracted) and resting on the Flight Loads Lab "soft support" system to simulate an airborne environment. This test was the sister to the Rollout - Ground Resonance Test performed in Louisville, Colorado in December 2016. 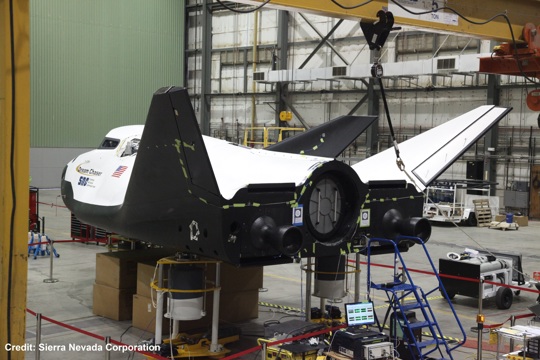 These tests were completed in Hangar 4833 (the former Space Shuttle hangar used for Enterprise) at AFRC. This test involved two cranes lifting the test article at three different pitch angles and deploying the gear at the max crane height during each test case. The main objective of this test was to demonstrate the integrated functionality and performance of the radar altimeters with the landing gear stowed, during landing gear deployment, and after landing gear deployment. Additional objectives included demonstrating that the radar altimeters worked simultaneously as well as independently. 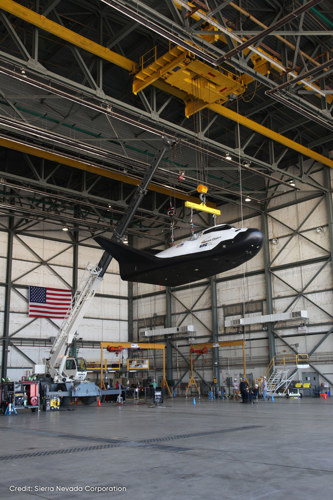 Our Guidance, Navigation and Control System engineers designed specific software filters to ensure the Dream Chaser structure responds well to flight control surface inputs.  Gain Margin Tests were performed in both ground and airborne configurations to evaluate specific flight control surface inputs and verifying fundamental laws of aerodynamics.  The airborne gain margin tests were performed on the flight loads lab and ground testing was performed while Dream Chaser was on its landing gear.

Additionally, the team just completed their first Captive Carry Test, allowing them to refine helicopter crew techniques, gather a wide variety of additional data on the vehicle and provide an opportunity for the flight control team to train prior to the Free Flight Test.

The Dream Chaser spacecraft’s Free Flight Test is slated for later this year.