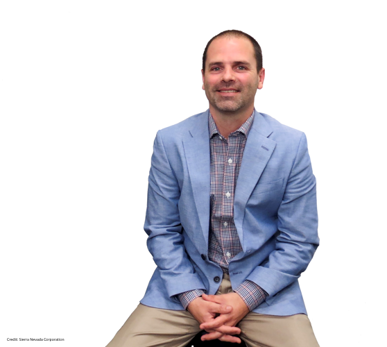 Did you know around 30% of SNC employees are veterans? They hold positions as engineers, program managers, vice presidents, field service technicians and beyond. SNC supports hiring veterans – clearly – but we are particularly proud to see when they thrive here.

Dan, a Sr. Security Manager, has been at SNC for 17 years! He joined the Security team after a career in the Navy. Read on, to learn why he says it was an honor and privilege to have served in the United States Military and now to serve our country behind the scenes as a cleared defense contractor.

Please tell us what you did in the military.
I served in the United States Navy for 5 years as an Aerographers Mate (AG). AG’s are the Navy’s experts in the field of Meteorology and Oceanography. During my time in the Navy, I served at Naval Air Station Fallon, NV, Naval Support Activity Bahrain and Naval Air Station Pt. Mugu, CA.

While at NAS Fallon, I provided hourly weather observations as well as forecasting for the airfield and bombing ranges in support of the Navy Strike Fighter Tactics Instructor program, more commonly known as Top Gun. From there, I went to NSA Bahrain, providing weather forecasts for the entire 5th Fleet AOR as well as in-flight weather forecasts for live mission operations. While in Bahrain, I was also part of the base Auxiliary Security Force. I finished my service at NAS Pt. Mugu where I served as the Lead Petty Officer for the weather office at the supporting airfield on San Nicolas Island.

What brought you to SNC?
Chance. As I was about to transition out of the Navy, my wife and I knew that we wanted to move back to the Reno/Sparks area and I wanted to stay in the field of meteorology, but weather job opportunities in the area were non- existent at the time. So, I started looking at other possibilities. One day while I was at work, my wife was job-hunting for me and she happened to stumble on a newly posted job req. at SNC for an entry-level security position, so I applied. Unfortunately, I was not offered the position. I was feeling a bit defeated at this point as the job searches were not going so well. But as luck has it, a few weeks later the candidate that was offered the job backed out and I got the call. So here I am 17 years later and going strong.

What is your job at SNC and why do you enjoy it?
I am the Sr. Security Manager based out of the corporate office in Sparks. I am responsible for the overall local security program as well as provide corporate wide security support. I enjoy being a security professional because our work matters. The security department is an integral part of one of the nations’ leading defense contractors promoting and enhancing National Security.

What does it mean to you that 30% of SNC employees are veterans?
It means a great deal to me. Experiencing the difficulty of finding a job, let alone a career, as I was transitioning out of the military was very disheartening. SNC offered me a home to build a career that would enable me to support my family. I am forever grateful for that opportunity as I am sure other veterans are as well.