USAF and SNC add Aircraft to AFSOC A-29 Acquisition

SPARKS, Nev., May 11, 2020 – In an agreement with the U.S. Air Force, global aerospace and national security contractor Sierra Nevada Corporation (SNC) will deliver an additional A-29 Super Tucano for the Combat Aviation Advisor (CAA) mission for Air Force Special Operations Command (AFSOC). The aircraft will be the third A-29 delivered under the existing contract, which was announced earlier this year.

“SNC is proud of our close partnership with the U.S Air Force, specifically in identifying ways to acquire the additional A-29 at the best value to the U.S. taxpayer and in support of U.S. and allied operations,” said Ed Topps, vice president of tactical aircraft systems and programs for SNC’s ISR, Aviation, and Security (IAS) business area. “SNC is honored to build and deliver the combat-proven A-29 to the U.S. Air Force.”

The undefinitized contracting action by the U.S. Air Force is for SNC, as prime contractor, and its partner, Embraer Defense & Security, to deliver a third A-29 aircraft, as well as ground support equipment, pilot training (including difference training and instructor pilot upgrade training), contractor logistic support, aircraft sparing, and sustainment for AFSOC’s CAA mission, which helps build international partner capacity.

Production of the first two A-29s under this contract is currently underway in Jacksonville, Florida, with planned delivery of the three aircraft in 2021. Training and support activities continue through 2024.

Last month, the first A-29 for the Nigerian Air Force successfully completed its inaugural flight at the Jacksonville production facility.

About the A-29
The A-29 Super Tucano is the gold standard for light attack, combat and reconnaissance aircraft. Built in the U.S. by Sierra Nevada Corporation and its partner, Embraer Defense & Security, the A-29 has been selected by 15 Air Forces worldwide including Afghanistan and Lebanon. The A-29 is a versatile and powerful turboprop aircraft and is known for its rugged and durable design, which allows it to perform operations from unimproved runways and at forward operating bases in austere environments and rugged terrain. The A-29 is the only light attack aircraft in the world with a U.S. Air Force Military Type Certificate. 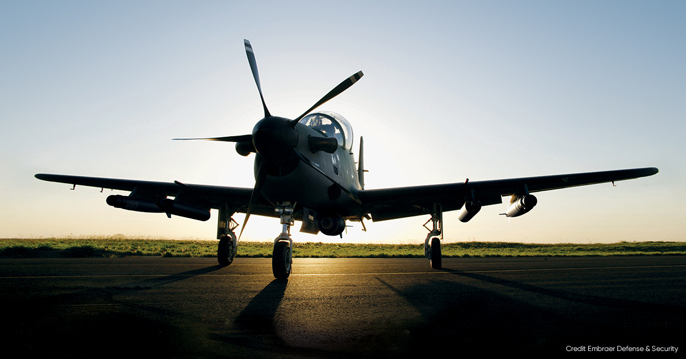