“This is a landmark milestone, not only for SNC, but for all of space exploration,” said SNC owner and CEO, Fatih Ozmen. “This state-of-the-art, mission-ready structure is a testament to SNC’s ability to deliver more capabilities to our customer without compromising on design.”

Built primarily from advanced composite materials, Shooting Star has a high strength-to-weight ratio, allowing it to achieve a high payload capacity to the space station. The structure was manufactured by subcontractor Applied Composites to SNC’s design requirements and recently shipped from its San Diego, California facility, to Louisville, Colorado, where it will be integrated by SNC.

“I am very proud of both Applied Composites and my team,” said former NASA space shuttle commander and retired USAF pilot Steve Lindsey, now senior vice president of strategy for SNC’s Space Systems business area. “Not only did they complete crucial testing for Shooting Star on an accelerated timeline ahead of Shooting Star's arrival in Louisville, but they innovated an entirely new approach to maintain the safety of both teams throughout the COVID-19 crisis.”

Shooting Star will now undergo integration with its subsystems before being delivered to NASA’s Plum Brook Station in Cleveland, Ohio for testing to ensure it can withstand both launch and space environments.

Dream Chaser is under contract with NASA for at least six cargo resupply and return service missions to the International Space Station under the Commercial Resupply Services 2 (CRS-2) contract. The Dream Chaser and attached Shooting Star transport vehicle can carry up to 12,000 pounds of supplies and other cargo, and returns delicate science to Earth with a gentle runway landing. Shooting Star also allows disposal services for the space station, and for these disposal missions, separates from Dream Chaser and disintegrates upon re-entry into Earth’s atmosphere. 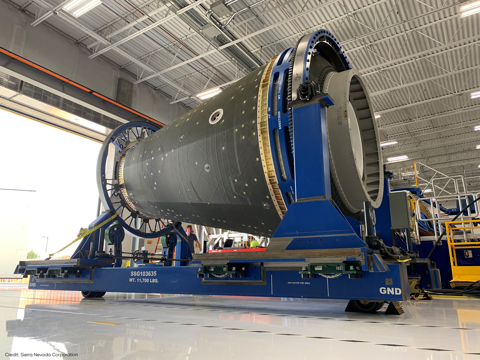