“The SNC team is readying the ETA in order to begin the second phase of atmospheric flight testing early next year and our strategic partner, Lockheed Martin, is leveraging best practices in tooling and composites to manufacture the first orbital Dream Chaser spacecraft,” said Mark. N. Sirangelo, corporate vice president, SNC’s Space Systems. “Both efforts have been ongoing simultaneously and we are very pleased with the progress to date.”

Since flight test phase one, in which SNC’s Dream Chaser ETA successfully returned trajectory data of the flight profile, SNC has made significant structural and systems improvements to the ETA including the composite wings and aeroshells. SNC also invested heavily in maturing the spacecraft orbital avionics, guidance navigation and control, the flight software, and employed a number of new processes, all of which will be used on the orbital vehicle as well. Finally, the advanced orbital Thermal Protection System (TPS), announced in June, was installed on the ETA skid in order to do advanced testing of the actual orbital TPS in this important area.

“The Dream Chaser ETA is currently scheduled to arrive at Armstrong Flight Research Center in early 2016 in order to begin the second phase of atmospheric flight test.”

In parallel to the ETA upgrade, SNC has made significant progress on the build of the first Dream Chaser orbital vehicle manufactured by Lockheed Martin. Lockheed Martin is leveraging best-practices in composite manufacturing from the Skunk Works®, its advanced development programs division, as well as its extensive experience in manufacturing and assembly from the F-35 Lightning II.

Lockheed Martin recently completed the Dream Chaser orbital cabin assembly, marking a significant milestone in the construction of this vehicle.  This assembly is the largest high-temperature unitized structure ever fabricated at U.S. Air Force Plant 4. The assembly utilized three-dimensional woven joints, to integrate internal frames with external carbon skins in a single co-bond operation, meaning nearly all fasteners on this critical cabin assembly are eliminated. This state-of –the-art approach to design and manufacturing is a highly efficient and affordable design solution.

“Upon completion, the Dream Chaser orbital vehicle will be the most advanced composite structure ever built. We look forward to Dream Chaser becoming the world leader in this area and to its first orbital flight,” said Sirangelo.

SNC’s Dream Chaser spacecraft is the only reusable, lifting-body, multi-mission-capable vehicle with a commercial runway landing capability - anywhere in the world. The Dream Chaser is a safe, affordable, flexible and reliable system capable of crewed and uncrewed transportation services to low-Earth orbit destinations such as the International Space Station. SNC has designed the Dream Chaser Cargo System as a solution for NASA’s commercial transportation services needs under the Cargo Resupply Services 2 contract and for other fully autonomous orbital missions. 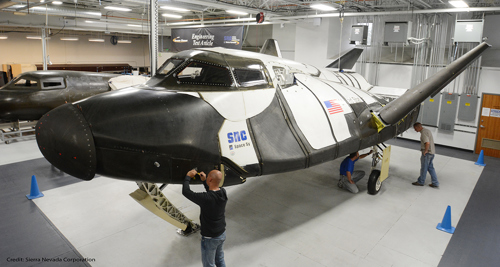