SPARKS, Nev., September 08, 2016 – Sierra Nevada Corporation (SNC) is proud to be supporting NASA’s OSIRIS-REx spacecraft in its objective to analyze and return the first-ever asteroid sample for the United States. The Origins, Spectral Interpretation, Resource Identification, Security-Regolith Explorer (OSIRIS-REx) spacecraft was built by Lockheed Martin and was launched successfully from Cape Canaveral today. The OSIRIS-REx spacecraft will travel to the asteroid Bennu to analyze and gather a sample, and then return to Earth via a detachable capsule. The spacecraft includes Solar Array Drive Assemblies (SADAs) built by SNC, which support the OSIRIS-REx mission to investigate formation of the solar system and the origin of organics that may have led to life on Earth and potentially elsewhere.

Solar Array Drive Assemblies
SNC’s SADAs will keep the two large solar arrays directed at the sun over its seven-year-mission, allowing them to generate power for the five scientific exploration instruments and sample collection devise on board the spacecraft. SNC’s SADAs have a strong yet compact design, using a volume and mass efficient configuration that affords the spacecraft architecture more focus on scientific instruments. 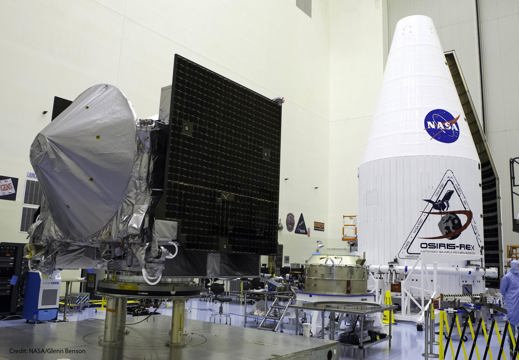