SPARKS, Nev., June 22, 2018 – In the East Room of the White House, a model of Sierra Nevada Corporation’s (SNC) Dream Chaser spacecraft Monday had a front row seat at the third formal meeting of the National Space Council, led by Vice President Mike Pence.  Fatih Ozmen, SNC’s CEO and owner, participated Tuesday in a meeting of the Council’s Users’ Advisory Group (UAG), of which he is a member alongside leaders of SpaceX, Blue Origin, and traditional aerospace companies such as Boeing and Lockheed Martin.

UAG members were nominated and selected by the National Space Council to represent civil, commercial, and national security space in discussing pressing space policy issues and opening a formal dialogue between commercial companies and government regarding growth in space.

“SNC’s Dream Chaser is an example of our trademark innovation and agility,” said Ozmen.  “We call it an SUV – a Space Utility Vehicle – because of its versatility in missions to low-Earth orbit, including opportunities to usher in a new era of science experimentation.”  Dream Chaser will service the International Space Station for NASA starting in late 2020.

A true multi-mission spacecraft, Dream Chaser can launch from various rockets; it can land on many commercial runways; it can do missions internationally like ones planned with the United Nations, giving member countries affordable access to space.

“The Dream Chaser is the perfect vehicle to support anything happening in low-Earth orbit.  We can use our vehicle to do standalone science, service the International Space Station or other orbiting platforms,” said Steve Lindsey, vice president of SNC’s Space Exploration Systems and retired NASA astronaut.  “Any of those options are good for us. We’re well-placed no matter what the future looks like in low-Earth orbit, and we’re going to be a big part of it.”  Lindsey is a veteran of five space flights, including as mission commander to the ISS.  He was inducted into the U.S. Astronaut Hall of Fame in 2015.

SNC is also promoting lunar and deep space exploration through its NextSTEP-2 contract and gateway concept. SNC is under NASA contract to build a prototype and presenting architectural framework ideas to NASA for a gateway platform that can support lunar activities or long-duration travel, like the mission to Mars.

About Dream Chaser Spacecraft
Owned and operated by SNC, the Dream Chaser spacecraft is a reusable, multi-mission space utility vehicle. It is capable of transportation services to and from low-Earth orbit, where the International Space Station resides, and is the only commercial, lifting-body vehicle capable of a runway landing. The Dream Chaser Cargo System was selected by NASA to provide cargo delivery and disposal services to the space station under the Commercial Resupply Services 2 (CRS-2) contract. All Dream Chaser CRS2 cargo missions are planned to land at Kennedy Space Center’s Shuttle Landing Facility. 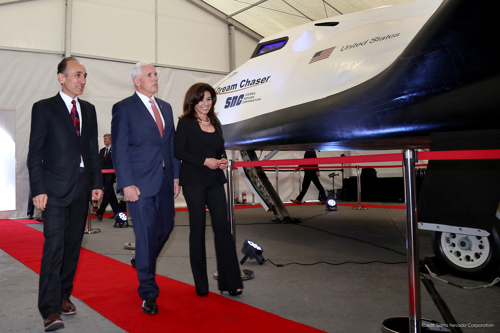