SPARKS, Nev., August 09, 2016 – Sierra Nevada Corporation (SNC) is celebrating the early success of NASA’s Juno spacecraft as it stabilizes its orbit around Jupiter and begins powering on scientific instruments for data collection.  Built by Lockheed Martin, Juno is the first solar-powered spacecraft designed to operate at such a great distance from the sun, making SNC’s electronic-free thermal devices critical in helping keep the spacecraft’s temperature regulated without drawing power away from the spacecraft’s scientific payloads. The four thermal louvers open and close to regulate the temperature of the spacecraft without pulling power or needing commands from the spacecraft – ideal for long-term interplanetary missions with wide-ranging orbits, orientations and payload operations.

“SNC would like to congratulate NASA and the entire Juno team on once again successfully pushing the boundaries of science and technology,” said Mark N. Sirangelo, corporate vice president of SNC’s Space Systems business area. “Over the next several months, scientists will gain not only a better understanding of the largest planet in our solar system, but the origins of our solar system itself. Our thermal louver technology is the result of NASA’s Technology Transfer Program, proof that strong government-commercial relationships are mutually beneficial.”

SNC was chosen by Lockheed Martin in 2009 to support Juno and continues to provide thermal systems for missions today. SNC has 25+ years of space heritage and has supported more than 70 NASA missions throughout the solar system. SNC’s Space Technologies product line is a global supplier of space technologies that designs and manufactures a wide range of subsystems and components including launch adapters and separation systems, pointing systems and motion control and electrical power systems. 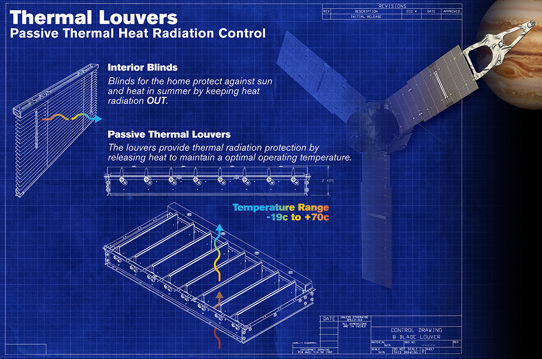 Thermal louvers similar to those provided for NASA's Juno spacecraft