Although SNC has built and launched solar arrays on more than a dozen of their own satellites, this eight-satellite system marks the first commercial sale of SNC solar arrays to another company, and the first time one of its launch adapters deployed an entire small satellite constellation.

The satellites, developed by Southwest Research Institute (SwRI) for NASA, will look at the tropics, gather data on wind speeds hovering above the ocean and eventually help track and report intensity of hurricanes to develop more precise extreme weather predictions.

“We are thrilled to be a part of a project that helps gain better hurricane data that can eventually help keep a lot of people safe, but from a business side, we are also glad we could help SwRI achieve their mission requirements with better performance and lower cost and risk,” said Bryan Helgesen, director of strategy and business development for Space Technologies in SNC’s Space Systems business area.

CYGNSS is NASA’s first small satellite system devoted to this kind of air-sea storm interaction.  The satellites were carried into orbit on a single launch vehicle and will receive both direct and reflected signals via Global Positioning System (GPS) satellites.

The small satellites are about five feet long each and are expected to be in orbit for a couple of years. They were launched out of Cape Canaveral, Florida earlier today.

Sierra Nevada Corporation provided the deployable solar array assemblies for each of the eight satellites, as well as the satellite constellation deployment module system.

The deployment module is a custom-designed launch adapter that interfaces with the Pegasus-XL launch vehicle. The eight satellites are attached to the deployment module during launch, and then the satellites are released in pairs into their proper orbit.  SNC’s heritage, fast-acting and low-shock Hold Down and Release Mechanism (HDRM) product allows for paired sets of satellites to be deployed simultaneously in an extremely soft and clean manner, in contrast to traditional pyrotechnic separation devices that create significant debris and generate high-shock loading into the spacecraft.

The deployed solar arrays harness energy from the sun used to power each satellite.

“This is a great example of SNC’s systems engineering and technology capabilities in action,” added Helgesen.

The Space Physics Research Laboratory at the University of Michigan College of Engineering leads the overall mission execution, and its Climate and Space Sciences and Engineering Department leads the science investigation. Dr. Chris Ruf of the University of Michigan serves as CYGNSS principal investigator. The Earth Science Division of NASA’s Science Mission Directorate oversees the mission. 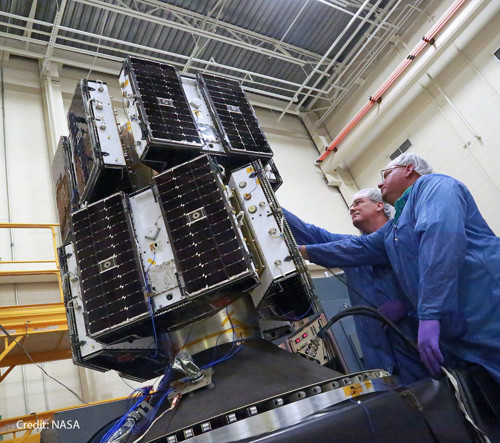