Andrea C. and Susie H. play an integral role in helping plants grow in outer space, but they are not engineers. In fact, they have no aerospace background whatsoever. You see, Andrea and Susie specialize in sewing. They hand-sew dozens of plant pillows that NASA sends to the International Space Station for the current system VEGGIE, and those plant pillows could also work in the Astro Garden ® system that is under development. You may not know SNC makes pillows. And it’s not every day you hear about seamstresses building things for space, so we sat down with Andrea and Susie to learn about their very unique job.

Andrea, you worked at a nonprofit for more than a decade. What inspired you to sew plant pillows here at SNC?

I took a very roundabout way to get here; I am actually a criminal justice major! But because of a job shortage, I ended up in the nonprofit world after college. I worked as a volunteer coordinator, event planner, fundraiser; you name it, I did it. But after more than a dozen years, I hit a burnout point, as a lot of people in the nonprofit world do.

It was around then that I decided to get my sewing machine cleaned.  I have been sewing since I was a child.  I took my machine into a local gal here [in Madison] and I told her that her job sounded really cool. She told me, I'm always looking for people to clean [sewing] machines.

So I tried it out and after cleaning three machines I said sign me up, and happily worked there for four years. That’s when I got a call out of the blue from an SNC recruiter. He said, there's a company in Madison that makes stuff for NASA (and other companies), and we need someone who can sew but also has some mechanical experience. Are you interested?

Until then, I had no clue what SNC was, and I had no clue we were doing this right here in Madison. So although I loved my job, it was too good of an opportunity to pass up. To be able to work on a space habitat, how cool is that! 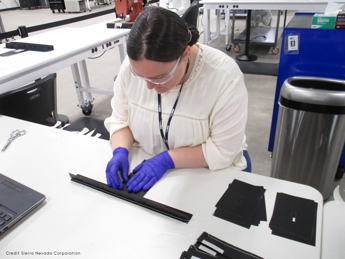 And you came to SNC from a manufacturing background, Susie?

I landed my position at SNC through Aerotek, an employment agency. I previously worked for a wire harness fabricating company and had 4 years of experience in soldering. I worked on soldering printed circuit board (PCB) when I started and [later] moved to the Plant Pillow project because I had the most experience with sewing at the time. I’d taken up sewing as a hobby a few years ago because I wanted to try something new and because I enjoy doing arts and crafts.

And now you both sew plant pillows. For those of us who don’t work in the Space Systems Group (SSG), what are plant pillows?

Andrea: I work closely with my partner Susie to sew the plant pillows. They are basically a shell that hold particulate and a seed.  The seed’s root system will grow in the particulate.  There is a wick on the bottom of the pillow which rests on top of the root mat.  The root mat is a water reservoir with its own wick on the top. The wicks allow moisture to transfer between the two.

Plant pillows [themselves] are made out of Teflon Coated Kevlar (TCK). We use Kevlar for a couple of reasons, it is not toxic to plants and it keeps light out of the root zone.  It is also durable, waterproof, and not flammable.  The wicks are made out of Nomex, also a flame resistant material; it’s similar to what stunt people and racecar drivers wear as a base layer for safety.

Andrea: Sewing them can be a challenge. Teflon Coated Kevlar is not forgiving, so you cannot make a mistake. It scratches easily, and it won't self-heal like cotton or fleece. People frequently ask us how sewing them is going; slow and steady is the response.

You cannot rush when working with Kevlar.

In order to sew the Kevlar you have to manipulate the sewing machine—in fact, you almost have to become the sewing machine. One pillow takes about 5.5 to 6 hours, from beginning to end. Once we get the material sewn into the box shape, some parts can’t be sewn on the machine anymore, so we have to hand sew a fair amount. It's far more difficult than I think most people think. But it's fun to watch them take shape. You go from this bag of random parts to these little pillows that will provide food for astronauts on the space station.

Susie: Knowing and seeing where the end product goes has been a great inspiration for me. It’s neat getting to see pictures of the astronauts using the plant pillows to grow plants in outer space! It’s something we don’t think about on a daily basis, plants in outer space.

What keeps you going, when the going gets tough?

Susie: One of my favorite mottos for getting through tough times is, “It could always be worse.”  No matter what challenges or obstacles I am faced with, I try to remind myself of that, and it has helped me to push through tough times.

Andrea: I've always been the kid looking up at the stars.  It's what made me take the job.  People are always focused on the rockets and propulsion; the stuff that gets you to space. Yes, we need those things, but once you’re there, you have got be able to live. It’s really cool to be part of that.