SPARKS, Nev., May 29, 2019 – Sierra Nevada Corporation (SNC), the global aerospace and national security contractor owned by SNC CEO Fatih Ozmen, and Chairwoman and President Eren Ozmen, for the first time opened to public view a test-firing of its patented VORTEX® rocket engine, showcasing next-generation technology available to NASA, the U.S. Air Force (USAF) and commercial launch companies. Among the public officials witnessing the rocket engine test was U.S. Senator Tammy Baldwin (D-WI), who supported transition of 1,500 acres of the Badger Army Ammunition Plant to the Ho-Chunk Nation. SNC and the Ho-Chunk Nation are working collaboratively to use Ho-Chunk Nation land for qualified testing in exchange for environmental clean-up, educational opportunities, jobs and other benefits to Wisconsin’s economy.

SNC’s VORTEX engine, which uses green and clean propellants, will be used for the SNC Dream Chaser® spacecraft when it services the International Space Station for NASA missions starting in spring 2021.

“We’re excited that SNC’s unique technology makes rocket engines both more powerful and more affordable,” said Fatih Ozmen, CEO and owner of SNC. “And we are proud that through creative partnerships our operations in Wisconsin are bringing about jobs, space technology without impact to the land.”

“This is an important day for our Made in Wisconsin economy and for U.S. space launch technology, and I’m proud to champion investments that will spur innovation, boost manufacturing and promote 250 good paying, clean energy jobs right here in Wisconsin,” said Senator Baldwin. “SNC and Orbitec are prime examples of the incredible things we can achieve when Washington is a strong partner and supports new, clean technologies that are moving our state, and our nation, forward.”

SNC’s VORTEX engine technology enables manufacture of simpler, low-cost, lightweight and more robust rocket engines, including upper stage engines that ignite at high altitude and boost vehicles operating in the upper regions of the atmosphere. SNC’s VORTEX upper stage engine is expected to yield tens of millions of dollars in savings for each launch. SNC is co-investing with the USAF for development of the engine for USAF needs.

In its arrangement with Ho-Chunk Nation, SNC upgraded facilities at the site of the historic World War II-era Badger Army Ammunition Plant. SNC replaced old hazardous building materials and augmented capabilities to manufacture small, in-space propulsion systems and the upper stage engine capabilities, part of a $20 million investment in work performed by 100 Wisconsin contactor led by ACS, Inc., an equipment, controls and facility solutions provider headquartered in Middleton, Wisconsin. Between ACS and all of the Wisconsin consultants, contractors and suppliers working under them, there were hundreds of people involved in the construction project.

“This technology is having a direct positive impact on the space launch capabilities and on the local Wisconsin economy, and we are so thrilled to provide cutting-edge engines that have great performance at a lower cost,” said Tom Crabb, vice president of SNC’s Propulsion & Environmental Systems business unit. “We are grateful to the Ho-Chunk Nation for their support, and allowing continued use of the historic land they now own again. Their commitment to help the Wisconsin economy has been vital for SNC to move testing forward.”

SNC acquired Wisconsin-based ORBITEC in 2014 and maintains its operations outside Madison. 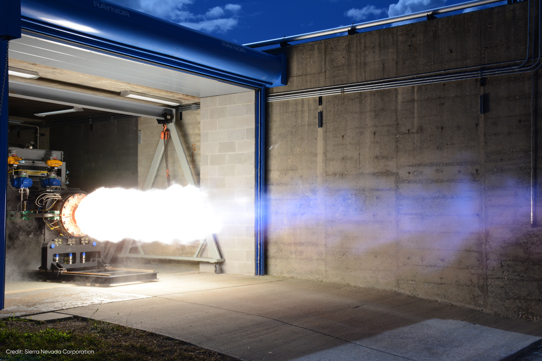