“Dream Chaser is the only commercial, lifting-body space vehicle capable of a runway landing anywhere in the world. That’s how astronauts prefer to travel to and from space and it’s no wonder,” said SNC CEO Fatih Ozmen. “The opportunity for our spaceplane to land on this historic runway where so many shuttle missions did before underscores both the practical advantages of Dream Chaser and its time-honored place in NASA’s space exploration heritage.”

Among its many attributes, Dream Chaser has the ability to land at any licensed landing site with a suitable 10,000 ft. runway capable of handling a typical commercial jet. The spaceplane’s low-g entry and runway landing protects sensitive payloads and provides immediate access to payloads upon landing. The first orbital vehicle in SNC’s Dream Chaser fleet will be named the Dream Chaser Tenacity™ spaceplane.

“A runway landing capability provides significant advantages over other return options,” said Janet Kavandi, former NASA astronaut and executive vice president of SNC’s Space Systems business area. “I was fortunate to land on this historic runway for my three NASA shuttle missions, and I understand how a spaceplane provides a safer and more benign entry experience for humans, as well as delicate payloads.  Astronauts can immediately depart the vehicle, and researchers have access to their experiments almost immediately after landing.

The SLF, now referred to by Space Florida as the Launch and Landing Facility, at Kennedy Space Center (KSC) was the first purpose-built landing site for an orbiter returning from space. A total of 78 shuttle missions landed at the SLF.

The application process for the Re-entry Site License included an environmental assessment in collaboration with NASA, the FAA, U.S. Fish and Wildlife Service, the National Park Service and the community. SNC supported Space Florida, the state’s aerospace economic development agency, in the agency’s license application by providing inputs to sonic boom and risk analysis.

Next steps for SNC include continuing its work with the FAA to be issued a license to operate Dream Chaser re-entries at the SLF, building on the success of Space Florida’s license application.

About Dream Chaser Spaceplane
Owned and operated by SNC, the Dream Chaser spaceplane is a reusable, multi-mission space utility vehicle. It is capable of transportation services to and from low-Earth orbit and is the only commercial, lifting-body vehicle capable of a runway landing. The Dream Chaser Cargo System was selected by NASA to provide cargo delivery and disposal services to the International Space Station under the Commercial Resupply Services 2 (CRS-2) contract. All Dream Chaser CRS-2 cargo missions are planned to land at Kennedy Space Center’s Shuttle Landing Facility. 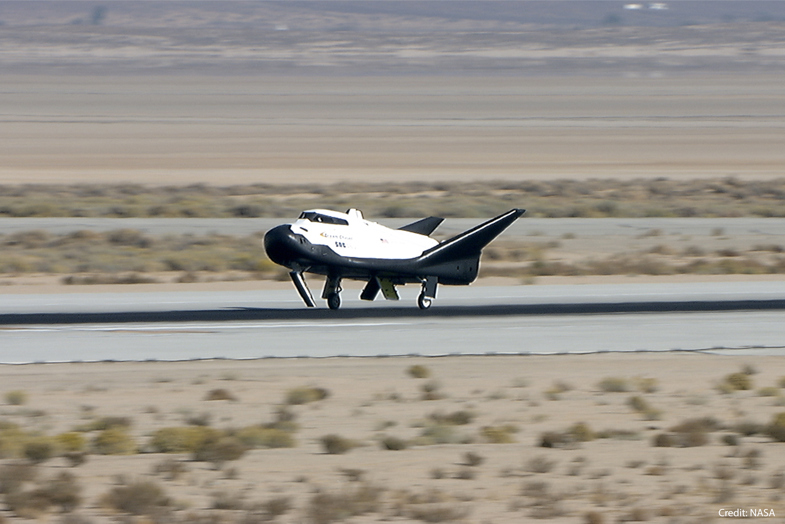