Our program managers play a critical role in SNC’s overall success. This month, we spent some time with Duston T., who works from Sparks, Nevada. He is a Program Manager for SNC's Mission Solutions and Technologies (MST) business area. Read on, as he tells us a little about his background, the accomplishments of the eHealth and Remote Monitoring program and team, and what motivates him when things get tough!

I grew up in Carson City, Nevada, about 30 minutes south of SNC’s corporate headquarters. I was honored to earn a nomination to the United States Air Force Academy, where I graduated in 2000 with a degree in Economics. I was able to see the country and learn from operations and acquisitions leaders in the Air Force from 2000 to 2005. My last base was at the Electronics Systems Center outside of Boston, Massachusetts.  During my cross-country journey home to Carson City, I wondered if northern Nevada had anything other than construction and casino jobs. That is when I found Sierra Nevada Corporation, in the summer of 2005.

What about SNC gets you excited to wake up and work in the morning?

During my years at SNC, I have been able to work on a wide range of development programs. They range from some of the original Enhanced Vision programs that aid pilots in low-visibility conditions to an Aerial Refueling program. The challenge of going from concept on the back of a napkin to proof of concept is part of what gets me up in the morning. However, the opportunity to work with all the talented staff at SNC is the real driver!

I’ve also been fortunate to be part of the eHealth & Remote Monitoring, team.  Over the years, I’ve been able to see a lean team of engineering interns never back down from a challenge and grow into top notch engineering leads. The team: Ash, Kitty, Jan, Kurnhee, Karl, Richard, Emily, Sarah, Terri, David, David, Don, and Carli, have all been key to the program’s success over the years, resulting in innovative solutions, including multiple awarded patents. My favorite time during any program is going to the field with the team and interacting with the medics. The enthusiasm of the team is contagious, and ultimately leads to operationally relevant demonstrations, accelerating the often slow and cumbersome acquisition process.

I want to tell a quick story about one of the eHealth team’s most ambitious demonstration events. In order to convince medical acquisition skeptics that the technology is relevant and ready to field, we hosted a Telemedicine Summit at The Nugget in Sparks, Nevada. The plan was to land a Blackhawk at The Nugget and show we could send patient data ahead of the MEDEVAC to the entire conference. The problem was the helipad at The Nugget could not support a helicopter that size.  We did not stop; we got creative.  With the support of the Nevada National Guard, who had some light utility helicopters (LUH) in the area, we decided to move forward with a remote demo where the LUHs would trail the Blackhawk, sending live video to The Nugget. In addition, we had our engineers in the back of the Blackhawk sending live video of the medic onboard using the system. It was the culminating event at the Summit, and failure would result in further delay of the program. Long story short, we showed all in attendance that our eHealth system worked in real time. 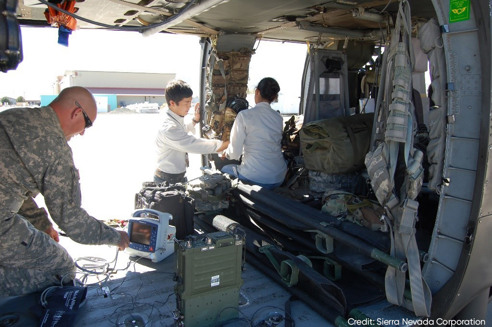 What is something you wish people knew about MST/EMS?

The SNC leaders from Operations, Engineering, Procurement, Quality Assurance and Business Management that welcomed me 17 years ago and helped me grow as a PM, are still around to help me out when needed. It’s rewarding to see how many of them have grown and thrived at SNC over the years.

What keeps you going when the going gets tough?

Several things keep me going when things get tough: the confidence that the SNC family can get through anything; the perspective that our failures along the way are just part of the journey, and not the end; the appreciation and respect of everyone that has served, and continues to serve; and finally the camaraderie of my peers and program teams.