“We are thrilled that Dream Chaser will be inspiring kids everywhere and up close,” said Eren Ozmen, SNC owner, chairwoman and president.  “A big part of SNC’s mission is to inspire the next generation of space explorers and innovators. This toy will spark kids’ imaginations, help them dream big and excite them about the possibilities in space.”

The toy will be a part of the Matchbox Sky Busters® line, which showcases America’s best and most groundbreaking aircraft and spacecraft, including NASA’s space shuttle.

The Dream Chaser spacecraft is a reusable and versatile vehicle for low-Earth orbit that is scheduled to service the International Space Station starting in late 2020 for NASA cargo missions under the Commercial Services Resupply 2 (CRS-2) contract 2.  The vehicle’s unique winged design and gentle runway landing make it the only spacecraft of its kind in the commercial space industry.

“We hope that America’s future astronauts and engineers who receive a Dream Chaser Matchbox toy will want learn more about math, engineering, science and space exploration,” said Steve Lindsey, vice president of SNC’s Space Exploration Systems and former NASA space shuttle commander.  “My curiosity for space started young, and I hope this helps spark the same in any kid who has this toy. There’s just something about a winged spacecraft that spurs the imagination.”  Lindsey commanded three assembly and test missions to the International Space Station, flew on five space shuttle missions for NASA and was inducted into the U.S. Astronaut Hall of Fame in 2015.

The Matchbox Dream Chaser toy will be available at retailers including Dollar General and J.C. Penney, along with stores supplied by Darice Global Sourcing.

About Dream Chaser Spacecraft
Owned and operated by SNC, the Dream Chaser spacecraft is a reusable, multi-mission space utility vehicle. It is capable of transportation services to and from low-Earth orbit, where the International Space Station resides, and is the only commercial, lifting-body vehicle capable of a runway landing. The Dream Chaser Cargo System was selected by NASA to provide cargo delivery and disposal services to the space station under the Commercial Resupply Services 2 (CRS-2) contract. All Dream Chaser CRS2 cargo missions are planned to land at Kennedy Space Center’s Shuttle Landing Facility. 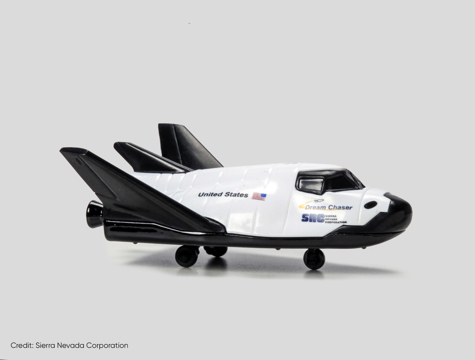 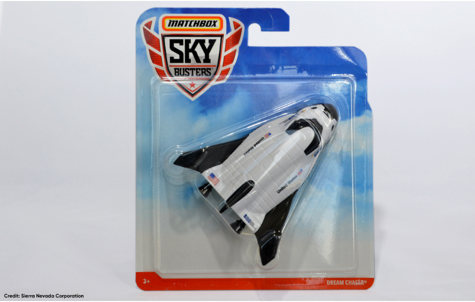