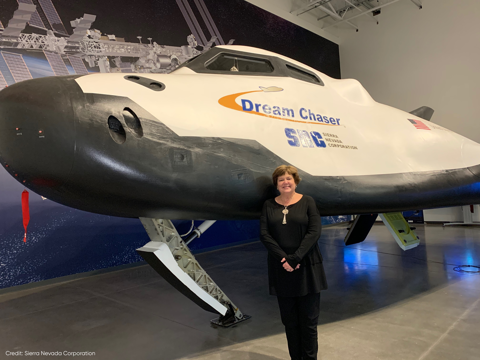 U.S. Navy veteran, pioneering female engineer, mom and classically trained French chef (yes, you read that correctly!) are some of the many titles you could bestow on Colleen M. However, at SNC she’s known as the VP of programs for the Dream Chaser® spaceplane where her day-to-day focus is on the Commercial Resupply Services 2 (CRS-2) program, which will provide cargo delivery, return and disposal services for the International Space Station using the Dream Chaser® spaceplane.

Learn more about Colleen, and how her chef and Navy background helped make her a better space engineer!

About Your Role at SNC

What enticed you to join SNC?
I started as the proposal consultant when SNC was pursuing the CRS-2 contract. In a way, CRS-2 is like my fourth child! The chance to help get SNC and Dream Chaser to flight was something I couldn’t pass up. I also see Dream Chaser as the key to changing the way we operate in space and that is thrilling.

What made you want to work in space?
I was 10 years old when Apollo 11 landed on the moon, and barely 11 years old when Apollo 13 had the mishap. From that time forward, I always knew I’d work in space. In fact, one of the reasons I chose to join the Naval Academy early in my career was because it had (and still does) sent the most grads to NASA’s Astronaut Selection Program. I never wanted to be IN space. I wanted to work on systems that GO to space.

You’re the VP of programs for SNC’s CRS-2 program. What does that position entail and what does a day in the life like?
No two days are alike. A normal day is getting caught up on emails, holding early morning calls with employees on the East Coast (I sit in a lot of meetings!), understanding the current issues, and providing help in whatever way I can to our engineering groups. Most days include understanding and resolving current and emerging issues, reviewing schedule performance and identifying ways to offset impacts. For example, I supported SNC’s Principal Systems Engineer Drew G. in his presentation to the NASA Integration Control Board (TICB) about a power waiver package and the programmatic impacts of an alternate solution.

What is CRS-2’s current and future impact on SNC?
CRS-2 is a critical program to SNC – now and in the future. We are in the most critical time in any program where we’re completing the design and development work, and transitioning to production, test and then flight.

As for the future impact on the company, CRS-2 will change space utilization as we know it. Dream Chaser enables so many concepts to be realized beyond the missions of supplying the space station, including low-Earth orbit (LEO) commercialization, on-orbit repair of satellites and potential travel to an eventual Gateway habitat. The Shooting Star™ transport vehicle for Dream Chaser also has its own spinoffs, such as a free flying spacecraft or as modules in an eventual Gateway that could orbit the moon. Our cutting edge composite structure work is also leading to a composites manufacturing facility, and an entirely different product line of components and parts.

What is the most meaningful or rewarding part of your work?
I get to work with an amazing team of people! When I began work on the proposal for CRS-2, something about the team was different than any group I’ve worked with. The teamwork – all of us working towards one goal – that’s what I love the most.

Tell us a little bit more about your military experience.
I spent nearly all of my 10 years of active duty in the U.S. Navy Space community. I’ve worked at a continuous wave radar facility, was a part of the startup crew for the Naval Space Command working under retired NASA astronaut and Vice Admiral Richard Truly, and then went to the United States Naval Postgraduate School where I earned my Masters in Space Systems. Post graduate school, I spent the remainder of my Navy career working with the U.S. Air Force at Buckley Air Force Base in Aurora, Colorado, and the United States Space Command in Colorado Springs.

As well, I am a Desert Storm veteran. My daughter was five weeks old when Iraq invaded Kuwait, and I was called off maternity leave. I worked in theater missile warning, and our job was to use an existing satellite and associated ground system to provide warnings of missile threats to people in theater, as well as to the intercept missile batteries. I also had a tour as a counterintelligence analyst, working for the Naval Investigative Service. (Now NCIS… yes, the TV show.)

You were in the second class that accepted women into the United States Naval Academy. How did that impact you and future generations of women working in STEM?
I told my daughters as they grew up opportunities I never dreamed would exist for women in 1977 opened because I received an amazing education and had a great first 10 years of my career. I’m very committed to women working in STEM and love seeing how the world has evolved since I moved up through the ranks.

As well, before joining SNC, I owned a small business and we volunteered at high schools on a number of STEM initiatives, including spacecraft design (satellites). I still mentor young women from those high schools, as well as women from subsequent classes at the Naval Academy in Annapolis, Maryland.

It’s been rumored you’re a classically trained chef, which is no casual, creative ‘hobby.’ What inspired you to become and engineer-turned-chef?
Cooking was a passion for me from an early age. I’m one of six children and my mom was a great cook. I learned watching her, and from middle school onwards I dreamed of someday being a chef. However, my mom was one of the original feminists and she encouraged me to pursue a technical career first. So I completed by education, went to professional cooking school at 40 years old, and spent seven years as a caterer after several months of “stagiere” work (unpaid labor) in Europe.

What’s your favorite dish or meal to make?
My favorite savory dish to make is an Alsatian dish: roasted pork, a sauce chausser (wild mushroom cream sauce) and spaetzle. My favorite sweet dish to prepare is crème brulee infused with interesting herbs, flowers and liqueurs.

How does your ‘chef’ creative side help you as an engineer?
When you cook you visualize the dish you are making and you plan each step to get to that vision. In engineering, I think in pictures: What is the end product? How do we get to that product? What are all the steps? But mostly, cooking is relaxing and a great stress reliever. When I have time to cook, it transports me out of the day-to-day stresses.

What advice would do you have for women trying to pursue or are currently pursuing a career in STEM?
Simply, go for it. Women bring a different thought process to the engineering field that helps teams expand their horizons in so many ways. Also, don’t be afraid to try whatever you find exciting. Life provides so many opportunities. If you try something and it doesn’t click for you, try something else.

Why is supporting and protecting explorers and heroes important to you?
Every generation needs explorers to continue to broaden our knowledge of what is ‘out there,’ and heroes are the ground breakers who give us the inspiration to help us realize our dreams. I had the opportunity to interview Admiral Grace Hopper, the legendary computer scientist, and although she was a tiny person, her mind was enormous! She opened so many doors for women in STEM making her one of my personal heroes and an explorer in her own right.

If you could travel to space with one person, dead or alive, who would it be and why?
Oh this is a hard question! My first thought is Jim Lovell, the commander of Apollo 13, or Leonardo da Vinci.