Getting into Dream Chaser: Understanding the Dorsal Panel

The dorsal panel for Sierra Nevada Corporation’s Dream Chaser® spaceplane has arrived at our Louisville, Colorado production facility! It’s one of the larger installations that will be on the spacecraft. We caught up with the design lead, Seth, to explain why the dorsal panel is so crucial to the launch of Dream Chaser.

If the dorsal panel isn’t properly installed, it may not seal or close properly, resulting in a scrubbed or delayed mission.

How large is the dorsal panel?
The dorsal panel was designed to fit a payload that could be up to three feet long, nearly two feet wide and weigh upwards of 400 pounds. 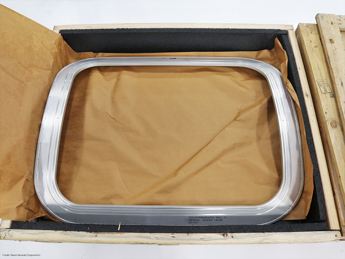 Where was it shipped to us from?
SNC designed the dorsal panel in Louisville and then we had a machine shop in California make the parts for us. Because of its three dimensional curve, the machining that went into its build was rather complex.

When does installation start?
Installation is going on right now and should continue for about a month. Once installation wraps up, there will be tests later on in the build of Dream Chaser to see if the dorsal panel can be properly sealed.

What happens once installation is complete? Are there further tests done on it?
Yes- more testing will be needed ahead of launch. The dorsal access is installed in the horizontal configuration of Dream Chaser and the seals are pressure tested afterwards. Vertical orientation may cause a shape change to the opening, so it’s important to verify the seals in the vertical configuration as well.

In order to function properly during a Dream Chaser mission, the dorsal panel needs to seal properly, have a large opening for payloads and people and be able to function at extreme temperature ranges.

Working through these numerous details and their level of importance is thrilling and provides many opportunities to learn more about the space industry and how to accommodate these needs. In short, it makes me a better engineer.

Why is space exploration so important to you?
Space is vast and what we don’t know about it is the enticing part. There may be jobs out there that would challenge me, but being part of that exploration is something most people dream of.