SPARKS, Nev., July 16, 2019 – Sierra Nevada Corporation (SNC), the global aerospace and national security leader owned by Chairwoman and President Eren Ozmen and CEO Fatih Ozmen, is teaming up with the Colorado Rockies through the end of baseball season  to promote Colorado’s aerospace industry and jobs. The partnership gets underway this week, timed to the 50th anniversary of the Apollo 11 lunar landing.

Apollo Night at Coors Field, part of the Smithsonian’s National Air and Space Museum’s Apollo at the Park program, will commemorate the moon landing anniversary by displaying a replica statue of Neil Armstrong’s spacesuit.  SNC will also have a 10-foot Dream Chaser model on display at the park and Lindsey will throw out the ceremonial first pitch for the July 17th game.

SNC is building its Dream Chaser spacecraft in Louisville, Colorado. It is scheduled to service the International Space Station for NASA, performing cargo resupply and return missions, starting in 2021.

Apollo 11 celebrations will be held nationally throughout the week of the 15th, leading up to the actual 50th anniversary on the 20th.  Apollo Night will take place on Wednesday, July 17th at 1:10p.m., with the Neil Armstrong up on display in Section 204 throughout the Rockies season. 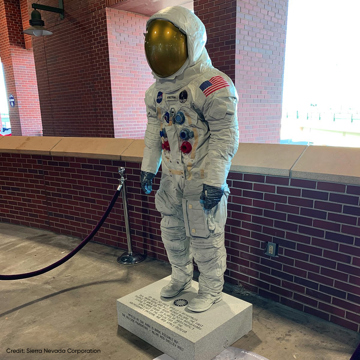