SPARKS, Nev., June 12, 2020 – Eren and Fatih Ozmen, owners of the global aerospace and national security leader Sierra Nevada Corporation (SNC), were honored this week with the prestigious Eisenhower Award for their lifetime contributions to U.S. national security. Many of the nation’s pre-eminent current and retired military leaders also attended the virtual celebration. The semiannual Eisenhower Award, presented by Business Executives for National Security (BENS), recognizes extraordinary Americans who embody the values and principles of President Dwight D. Eisenhower and his holistic definition of national security, which he described as “…the total product of our economic, intellectual, moral and military strength.”

“It is a true privilege to serve our nation and protect lives through technology that SNC builds,” said Fatih Ozmen, owner and CEO of SNC. “From underwater to space, SNC technology like our jammers and piloting systems keep American warfighters safe and help ensure the continued strength of this great nation. We want to pay it forward to future generations so we might inspire young people the way we were inspired as kids.”

“It is an honor to be recognized by an organization whose purpose, principles and leadership philosophy so closely align with SNC’s, in protecting our precious country, our people, American liberty and the pursuit of happiness,” said Eren Ozmen, owner and president of SNC. “We sit here as living proof that the American Dream is alive and well.”

The Ozmens and other 2020 award recipients join a distinguished list of past recipients including Jeff Bezos; Ross Perot, Jr.; and General Paul M. Nakasone.

Their recognition with the BENS Eisenhower Award comes on the heels of SNC’s selection last month as the only aerospace and defense firm to be named a 2020 US Best Managed Company. Sponsored by Deloitte Private and The Wall Street Journal, the award recognizes visionary companies for excellence in strategy, execution, culture and financials. SNC is also recognized among the three most innovative U.S. companies in space, as a Tier One Superior Supplier for the U.S. Air Force, and as one of America’s fastest growing private companies. 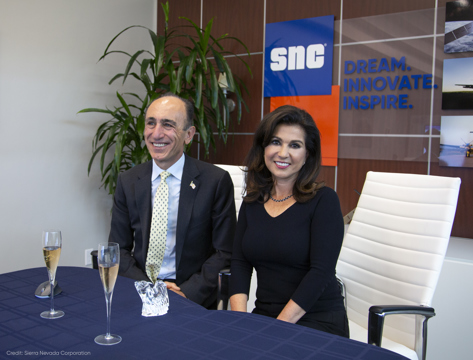