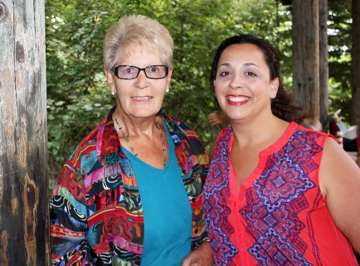 Claudia L. is leading SNC’s newly created Inclusion, Diversity, and Equity (ID&E) initiative. June is National Immigrant Heritage Month, and for Claudia, is an opportunity to reflect on why ID&E is so important. Read what inspired her to get involved, and the vision she has for SNC’s future.

Claudia, please share your background and what inspired you to lead ID&E at SNC.
In March, I transitioned to a newly created role called Inclusion, Diversity and Equity role for SNC after spending four years as an HRBP manager for various groups. I was excited to take on this role because I believe it is so important.  Helping SNC reinforce its family environment while we ensure all employees feel included is an exciting opportunity.

I am currently building our ID&E roadmap and seeking feedback and alignment. We recently conducted roundtables with some young professionals at SNC to gather more insight into our Engagement Survey results. And, we hope to soon announce a new Employee Resource Group for SNC.

*source: Core axis, The importance of Diversity and Inclusion in the Workforce)

Why do you think it's important for SNC to launch Employee Resource Groups (ERGs)?
ERGs are important for a variety of reasons. One of the most important to me is that they tend to foster a respectful and caring community that supports each other. Work relationships tend to evolve organically in any workplace. In most cases, it takes time for new employees to get accustomed to the organization or a team. As humans, we tend to form informal groups, which influence various aspects of an organization. I like to encourage ERGs in the workplace because it improves alignment and fosters greater innovation and creativity. When interactions happen across different departments and teams, multiple viewpoints factor into the key business drivers and strategies. These multiple points of view helps elicit new ideas and newer strategies which fosters improved innovation in the workplace. It's a win for the employees and the organization as a whole.

June is an opportunity to celebrate many things, including LGBTQ Pride and Juneteenth. One celebration particularly close to my heart is Immigrant Heritage Month, established in June 2014, which gives people across the United States an opportunity to explore their heritage and celebrate the diversity that forms the unique story of America.

My mother, Franca, immigrated to the United States at the age of 25 from Italy. She became enthralled with the United States as a child. Her early years were spent in the midst of WWII. Despite Italy starting as part of the Axis powers their allegiance switched. Allied Soldiers were seen as beacons of hope. My mom shared that U.S. soldiers were being housed on their land and were living in their barn just before the end of WWII on September 2, 1945. These U.S. soldiers would often share candies with her and her brother Romeo, and my grandfather would allow the soldiers to eat apples that were available on the farm. Food was very limited during WWII for most Italians, so sharing what little was available made a lasting impression in her young mind.

When my mom immigrated to the U.S., she landed in Gilroy, CA, which had a large and welcoming Italian community. She was put into high school to learn English, she studied to gain her citizenship and eventually met and married my father, a first generation Italian himself. Her immigration story is relatively positive, because she had a community to support her. It's scary to pick up and leave your country and family, but she did it for the promise of something better. How she was welcomed to the United States became reflected in how she helped others. All nationalities were welcomed in our house. And as you would expect in an Italian household, everyone had a seat at the dinner table.

Her story reminds me of the importance to investigate and explore - not only my heritage - but the diverse backgrounds of those I interact with. So much about who we are as a people and culture is what makes the U.S. unique. Building a shared understanding of a person's culture, background and experiences helps us engage better both at work and at home. This is why Immigrant Heritage Month is so important to acknowledge.