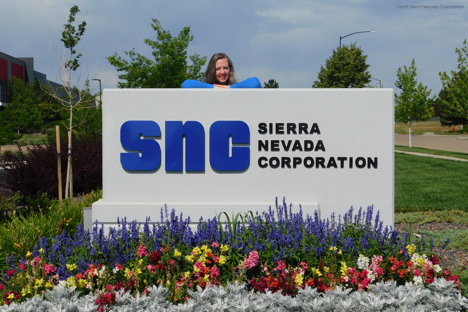 When Sierra Nevada Corporation’s lead Computer Aided Design manager for the Dream Chaser® spaceplane team needs to describe her career to people, Cherissa F. equates it to packing up the car for vacation. Everything needs to be loaded into the car, but how you do it is key, not only for a successful vacation, but for Dream Chaser missions too.

In this Employee Spotlight, she explains to us why her job involves a delicate balancing act as the team prepares Dream Chaser for launch. We also learn why an important meeting in her college Calculus II class is influencing her choice of who she’d travel to space with.

What drew you to SNC and how long have you worked for the company?
I’ve worked for SNC for over seven years now. I was drawn here by the exciting Dream Chaser program, where science experiments (and someday, astronauts) will launch to the space station and eventually fly back to Earth and have a gentle landing on a runway. SNC’s superior 401k matching program made the financial aspect of the decision easy. The location in Colorado, near thousands of miles of mountain trails to explore, was also important to me since I enjoy hiking and nature photography.

You are the lead Computer Aided Design (CAD) manager for the Dream Chaser team. What does that position entail and what’s a day in the life like?
When I talk to people outside the industry, I liken my job to packing the car for vacation. You want to have the important things you use often easily accessible, like snacks and drinks. You also want to make sure you don’t put things where they’re going to get too hot during the trip (like chocolate for s’mores).

I put care into determining where every component of the spaceship goes: from batteries, to computers, antennas, power distributors, inertial sensors, propulsion tanks and much more! In doing that, I have to consider things like the overall center of gravity of the vehicle. Most atmospheric entry vehicles, from spaceplanes to the classic conics that are sent to Mars, want to have about half their weight where they have a third of their volume for stability, so it’s a real 3D puzzle! Some components are loud from an electromagnetic perspective and they have to be located away from other components that are sensitive to that noise. Another consideration is components that have to talk to each other a lot – you want to put them near each other so that you don’t have unnecessarily long wires stretching all over the vehicle. Balancing all these needs so that the system works together throughout all phases of its mission is my day-to-day challenge.

Also, in concert with other “super-users,” I help the CAD-users on the team understand the best ways to take advantage of the CAD tool so that we get parts produced accurately and make sure they all come together correctly in time for launch.

Can you explain what a CAD file is?
Computer Aided Design evolved out of the old drawing and scale model based way of making things. Now, we can render the entire spaceplane, from tiles to bolts, in the computer and see how they all fit together. Creating CAD is much like visual programming, where we use a set of functions to represent what a part looks like after it’s made. A CAD file also contains much more than just the shape of a part – it has information about its materials, its moments of inertia, and can be easily converted into a different type of model so we can analyze the stress and temperatures on a part and make sure that it is designed well enough to survive re-entry. When we first sent humans to the Moon in the 1960s, an army of about 2.5 million people worked on that one mission. Today, there are approximately 500,000 aerospace employees worldwide; we’re exploring the depths of the ocean from space, visiting other planets, and the pushing beyond our solar system with the help of computers that make our jobs much more productive.

You also manage older Dream Chaser design CAD elements. Why is ensuring SNC’s historical data doesn’t get lost so important?
In aerospace, what’s old is often new again. The shape of the Dream Chaser was conceptualized in the 1960s for a different purpose. Now, it’s going to supply the space station and return important science experiments that will benefit everyone on Earth. It’s important to keep record of all the ideas we came up with along the way so that when improvements in technology come along – like the all-composite structure that makes Dream Chaser possible – we can re-visit concepts that weren’t workable before.

Why is space exploration so important to you?
NASA’s space shuttle program was my inspiration throughout my school years. I also enjoyed stories of space exploration like the Star Trek TV series & movies and reading sci-fi books by authors like Anne McCaffrey and Joan D. Vinge. In these fictional depictions, humans were curious, open to new ideas and always called upon to be their best selves in order to push out into new realms. I like the idea that we can aspire to improve ourselves not only technologically, but also as people, while learning more about this wondrous universe that we inhabit.

If you could travel to space with one person, dead or alive, who would it be and why?
My husband and I met at the University of Illinois in Calculus II class and share a zest for space exploration. I could not imagine doing something as exciting as exploring the universe without him by my side.