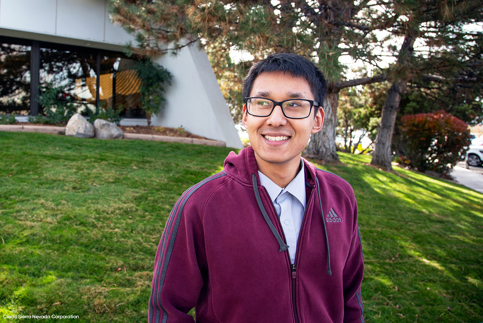 Meet Kripash Shrestha, a software engineering intern in Sparks, NV who is one of three SNC interns who were selected as Top 100 Interns in the US by WayUp, a job site targeted to college students and recent graduates. He started interning with SNC in May of 2018, and is now in the co-op program working on radar-based navigation and landing systems. We sat down to talk about what it's like to intern at SNC – and how it's shaping Kripash's future.

Where did you grow up?
Right here, in Reno, Nevada.

What college do you go to?
University of Nevada, Reno. I am in my third year there. I’m going to school full time, and working at SNC three days a week.

How did you land on an internship with SNC?
I heard of SNC through UNR [University of Nevada, Reno] emails but really learned about it when I attended the engineering club fair. I’m interested in drones, aerial robotics, and robots in general. I saw SNC’s booth there and talked with a software engineer about the company, and learned that SNC was the first company to land a drone on an aircraft carrier. I thought that was pretty awesome, went home, and looked up the Dream Chaser®. At that point, I knew I had to apply.

What’s it like interning here?
The environment is really positive and nice. Everyone gets to know each other. The best thing I’ve found out so far is that even higher up in the company, people get to know the engineers, and everyone else. Last Friday, I was assigned a new project because one of the chief engineers knew me by name. It was awesome that someone so high up knew an intern like me! It’s just a positive environment where people help each other out.

What projects have you worked on at SNC?
I've been working on the Navigation and Landing Systems (NLS) team. Specifically, I've been helping with an all-weather precision approach and landing systems.

What was your reaction to being named a Top 100 Intern in the United States?
My family made a big deal about it. People in the company congratulated me. It just feels really nice, and tells me that I'm doing good work, and that I should continue improving on what I'm doing. So I'm raising the standard for myself.

Would you recommend this experience to other interns?
I would definitely recommend it to my friends. Especially if they're interested in space, defense, or navigation landing systems. When you think of internships, you think of some companies giving low work to the interns. But here, you're getting a lot of good opportunities and experience. You're documenting code, and getting the same experience other software engineers are doing at the same time. I'm sure 100% this expands to other departments.

Do you plan to continue your career with SNC after college?
I could see myself staying here, because one of the most interesting things to me is autonomous systems. But I'm also interested in degraded visual environments. That's one of the areas in SNC that really interests me.

One of the great things about SNC is that it doesn't matter where you start off, opportunity wise. One of the chief engineers mentioned that if you're in a project or department, but your interest goes elsewhere, SNC can help you find a position that fits your interest. So it's not like you're forced to work in a certain area.

Do you know an employee that is interested in a SNC internship? Have him or her email universityrecruiting@sncorp.com.