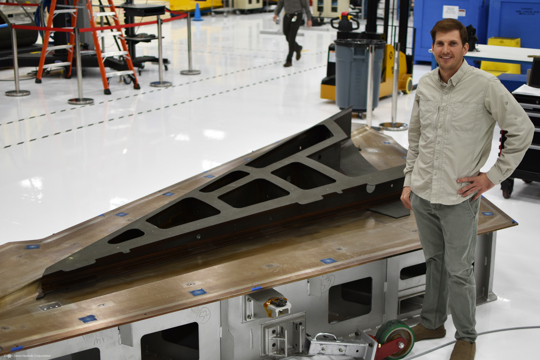 Today, we’re celebrating a big milestone in the Dream Chaser program: its wings have arrived! The wings recently arrived at the Louisville, Colorado facilities.

So what should we know about the wings – and why is this such a big milestone? We spoke with Sierra Nevada Corporation’s Wing Structural Design Lead, Trent H. to learn more.

How are the wings for Dream Chaser different from those you’d see on an airplane?
There are multiple differences:

Tell us more about what the wings are made of.
The wing structure is made of carbon fiber and attached to the body using titanium components. It’s the same material that’s used for the primary structure for Dream Chaser.

The wings will have a layer of tiles on the outside - what benefits does this provide?
The tiles give Dream Chaser its black and white color, but most importantly act as a thermal shield, protecting it from the extreme temperatures the space vehicle will face both on-orbit, and during re-entry.

We started with the tile technology from the space shuttle program, but advanced the product, developing a more lightweight tile that is capable of withstanding equal or greater temperate variations.

These tiles are also stronger than those used on the space shuttle, which will help protect Dream Chaser from micro-meteorite debris.

When complete, each wing will be more than 13 feet long, and will have more than 150 tiles on it.

After the launch vehicle separates, the complex Wing Deployment System deploys the wings using components that will ultimately lock the wing in place while the space vehicle is on-orbit. Once deployed, the wings will remain in that configuration until after landing.

Why was this such an interesting design challenge for you?
The Dream Chaser mission in itself presents a unique set of requirements. When you add in the fact that the primary structure is pushing the boundaries of composite assembly, the resulting design challenge is a once in a lifetime opportunity.

What does working on the Dream Chaser team mean to you?
The Dream Chaser team is an awesome group filled with some of the smartest people I’ve ever met. I’m proud to work alongside such a talented and friendly team of people determined to meet the end goal.