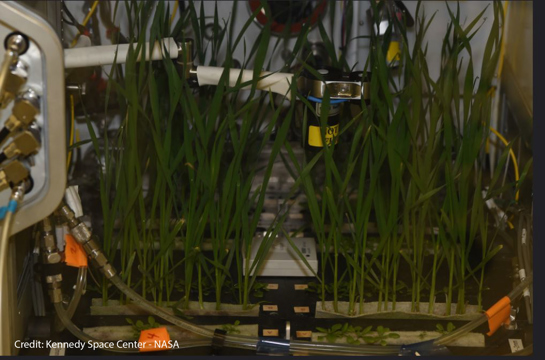 “Knowing how to grow fresh food and plants to process air and water for life support is critical to the future of humans being able to live in space for long periods of time.   We are delighted to help create the technology that makes future human spaceflight more cost effective,” said Tom Crabb, vice president of SNC’s ORBITEC business unit, a part of SNC’s Space Systems.

The APH will provide the environmental conditions to grow plants in microgravity, test new technologies and conduct controlled science experiments, which are expected to be key in making agriculture and fresh food more prominent in extended space exploration. Information and technology from APH will also be used in other space biology experiments, where specific growing conditions are beneficial or required.

The new system is the next generation of biological systems, the largest of its kind, providing long-duration plant science capabilities.  It’s self-contained and automated, which significantly reduces the required crew time to grow plants and ideally will lead to a more reliable and fruitful crop at harvest.

APH builds on previous experience with controlled microgravity environments, including the successful Biomass Production System flown in 2003 and significant advancements from the previous VEGGIE payload, which was also developed and fabricated by SNC’s ORBITEC, alongside NASA. VEGGIE provided the first fresh food to NASA astronauts on the ISS. While VEGGIE crops are working well, the APH is more sophisticated because it takes away the open environment variable.

The plant habitat is about the size of a small kitchen oven with precise controls of the shoot and root environments and the system easily integrates into existing ISS infrastructure for sustainable operations.

Engineers from SNC’s ORBITEC, located in Madison, Wisconsin, spent nearly five years on APH, refining technologies with KSC and honing in on a design that would allow the system to be treated like a plug-and-play unit and comprise of subsystems that could be easily removed and replaced. The new unit is an important milestone in proving that plants can be grown on a large scale in a space environment with little to no supervision.

Portions of the APH were launched as part of the Orbital ATK Cygnus pressurized cargo module by a United Launch Alliance rocket from Space Launch Complex 41 at Cape Canaveral Air Force Station in Florida. SNC also manufactures the Passive Common Berthing Mechanism (PCBM) which allowed Cygnus to conduct a pressurized berthing and mating to the ISS. The Cygnus module is also equipped with the SNC visual cueing LED external lights. This is SNC and Orbital ATK’s seventh successful use of the PCPM and visual cueing lighting for missions to the ISS.